Quintet of the Americas 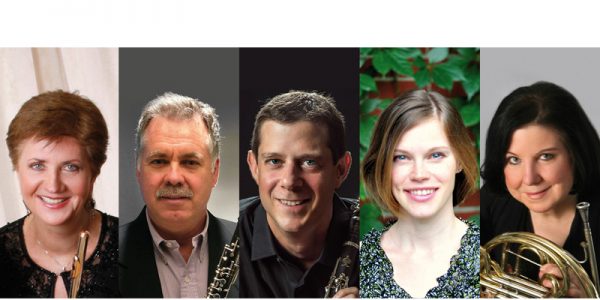 Enjoy a winter classical concert in the parlors with the Quintet of the Americas, featuring clarinetist Benjamin Baron, flutist Karla Moe, horn player Barbara Oldham, oboist Matt Sullivan, and bassoonist Sasha Enegren. The group was formed in Bogota, Colombia, in 1976 by U.S. citizens who were principal wind players in the Colombian National Orchestra. The group relocated to New York City in 1979 and has since enjoyed an international career that has taken them to concert halls throughout the Americas, the Caribbean, and Asia, including annual performances at Manhattan’s Americas Society. Two-time recipients of ASCAP-Chamber Music America Awards for Adventurous Programming, the Quintet’s repertoire represents works from composers with a wide range of aesthetic viewpoints. A reception with light refreshments will follow the performance.

Music will include the premiere of James Cohn’s Sourwood Mountain, an arrangement of “You’ll Be Coming Around the Mountain”.

The Composers Now Festival celebrates living composers, the diversity of their voices, and the significance of their musical contributions to our society. During the month of February, the Festival brings together myriad performances ranging in genre from jazz to indie, classical to post-classical, experimental to folk, and beyond. Composers will be in attendance at all event. For more information on the festival, visit composersnow.org